Escape from the city and discover two unique palatial gardens, considered the finest of their kind in the world. Journey through time, as you see Ancient Roman Emperor Hadrian’s Villa and the Renaissance pleasure-palace, Villa d’Este . 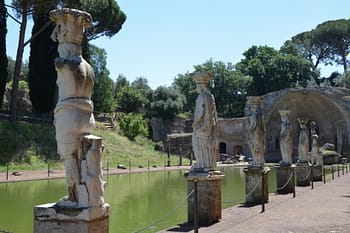 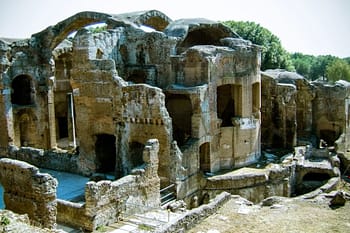 Day Trip from Rome by Car

TIVOLI: A DAY TRIP FROM ROME TO VILLA D’ESTE AND HADRIAN’S VILLA

Escape from Rome for a day and experience the wonders of two very different, but equally marvelous, palatial gardens in the heart of Lazio’s countryside. Both Hadrian’s Villa and Villa D’Este display the immense power of Rome, at two very different times.

Take a transformative journey from Ancient Rome to the High Renaissance – and learn about the private passions of the elite on the way.

You will be picked up from your hotel at 8:30 am, before you embark on this remarkable and memorable day trip from Rome.

First, you’ll visit Emperor Hadrian’s remarkable villa, which he first used as a summer retreat, before making it his main residence in the last years of his rule. You’ll find a wealth of water features and classical statuary that inspired some of the greatest artists of all time – including Michelangelo and Leonardo da Vinci.

Hadrian’s Villa is resplendent in many dazzling architecture, including a rotating stage on water, where the Emperor would have enjoyed a relaxing summer’s evening watching the dramas. Other highlights include the Canopus – a recreation of an Egyptian pleasure resort, with a pumpkin-shape dome that was a recreation of the Temple of Serapeum in miniature.

Onwards to Villa D’Este where you’ll experience the dizzying, unbelievable wonder of the Villa’s palatial gardens for yourself. The gardens of the Villa boast some of the most spectacular fountains in Italy– if not the entire world.

Cardinal D’Este attempted to be Pope five times – and with each rejection, he poured his frustrations into some truly remarkable waterworks. The Gardens of Villa D’Este are positively resplendent in an excessive chorus of fountains; including the wall of one hundred fountains, where Gargoyles spurt out water at every angle.

Other highlights include the Fountain of Neptune, where waterfalls and gravity defying water jets, that reach the height of 14 meters, dance and swirl together, for dizzying effect. Cardinal D’Este even built his own Rome, which you can still see in the bottom of the garden – because if he wasn’t going to be the Pope in Rome, Rome would come to him!

A visit to Villa D’Este complements a tour of Hadrian’s Villa, as not only was the cardinal inspired by the principles of classical design he found there, but he also pilfered many of the classical statues to furnish his own home!

A day trip from Rome to Tivoli’s Villa D’Este and Hadrian’s Villa is the best way to experience the lifestyle of Roman power-players, at two of the most important times in the city’s history. In doing so, you’ll get to enjoy fantastic palatial gardens, architectural wonders and dizzying waterworks!