Climb an international icon and hear this beautiful city’s remarkable history, on this Square of Miracles & Leaning Tower of Pisa Tour. 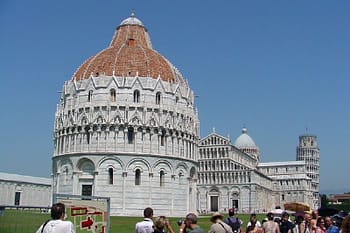 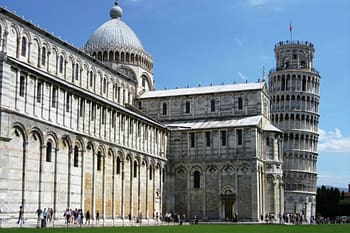 Find out exactly how beautiful mediaeval Italy can be on this private Pisa tour. You’ll not only admire the amazing Gothic monuments on Pisa’s Square of Miracles, but you’ll discover their dramatic histories – and climb the Leaning Tower!

Discover how a little city, nestled inside Tuscany’s rolling hills, was once an international power-player – willing to challenge Rome.

You’ll see the remarkable monumental architecture which show the ambitions of little Pisa: a small city that wanted to rule the world.

After meeting your expert guide, you’ll embark on your exploration of the city center. The whole historic center of Florence is pedestrianized, which gives the effect of the city remaining unchanged for 100s of years. It is easy to imagine Leonardo da Vinci or Michelangelo, strolling over these cobbled streets, sketchbook in hand.

ITINERARY OF YOUR PISA TOUR

First, you’ll meet your expert guide – a Tuscan native – who knows everything about the remarkable city of Pisa. Your guide has a passion for everything Italian history. They’ll explain how Pisa became one of Italy’s premiere naval powers; and all the wealth which came with it.

After meeting at 9am, you’ll join your guide for a tour of all Pisa’s main attractions. You’ll enter Pisa’s Cathedral and Baptistry, discovering how this tiny republic’s wealth made these sites architectural wonders. Walk through the monumental cemetery: see a serene mediaeval courtyard and magnificent sculptures.

Then, you’ll climb the Leaning Tower! Hear the remarkable – and humorous history – of this beloved tilted icon, as you ascend its swirling staircase. From the top, enjoy a beautiful view of Pisa and the Tuscan Hills beyond, on this Square of Miracles and Leaning Tower of Pisa Tour.

THE LEANING TOWER OF PISA

On this private Pisa tour, you’ll enjoy exclusive, skip-the-line access to the city’s iconic Leaning Tower. Enjoy climbing the beautiful golden staircase inside the swirling Leaning Tower and hear remarkable facts about the construction from your expert guide.

As you ascend this world-famous bell tower, your guide will explain just it came to be leaning. Did you know that it leant almost from the get-go, when it was completed in 1372?

From the top of the Leaning Tower, you’ll enjoy a spectacular view of Pisa central and the Tuscan Hills beyond. Admire the beautiful, green Square of Miracles stretched out before you – a designated UNESCO world-heritage site.

On this Pisa tour, you’ll discover Pisa’s Cathedral: one of the finest examples of mediaeval architecture in Italy. The Cathedral is a delightful medley of arches of different sizes – the façade is more a composition of open arches than anything else!

Pisa Cathedral was built when Pisa was one of the biggest naval powers in Italy. The Cathedral was constructed at the same time as St Mark’s Basilica in Venice – the two cities were staking their claim of being the wealthiest, with the most impressive Cathedrals in Italy.

Pisa were so confident in their power that they built their Cathedral outside the city walls – to show they didn’t fear any attacks. On this Square of Miracles & Leaning Tower of Pisa Tour, you’ll see the beautiful Cathedral – one of the most unique in the world – and discover its history.

In Pisa’s remarkable Square of Miracles, you’ll see that the Leaning Tower isn’t the only architectural wonder in this small city. Another highlight is the charming Baptistry of St John.

The Baptistry is made of glimmering white marble and is a testament to the ingenuity of Pisa’s mediaeval artisans. Pisa’s Baptistery unites an earlier Romanesque style – with huge, sweeping arches – and an elegant, Northern Gothic.

Both are combined in a charming round – like the dome of a Cathedral placed upon a green lawn. You’ll get to admire all its beauty on your Pisa tour.

Pisa’s Monumental Cemetery was the last architecturally marvel to be constructed on The Square of Miracles. In the mediaeval period, Pisa wasn’t only a naval power – but an intellectual one. Pisa had one of the first universities in Italy, and many of its ruling families had members who were also influential academics.

The cemetery was built in 1277 to house Pisa’s dead; both its influential military men and the academic class. Today, a tour of Pisa’s Monumental Cemetery promises a walk through a beautiful mediaeval cloister, adorned with marvelous frescoes. Not only that, but you’ll see some of the most unique sculptural graves in the world.

WHY CHOOSE THIS PISA TOUR?

On your Square of Miracles and Leaning Tower of Pisa Tour, you’ll discover the beautiful heritage of Pisa; a city which was once so powerful, it had ambitions to challenge Rome.

Pisa has always been a center of culture; a beautiful university city by the sea, glimmering in white marble. As it was then, so it is today. You’ll discover its treasures – and ascend the beautiful Leaning Tower, on this Pisa tour.