Florence – a jewel in the crown of Italy. On this Florence walking tour, you’ll discover incredible history, beautiful architecture and an incomparable atmosphere in the former capital of the Italian Republic. Our expert guide will enlighten you to all the fascinating tales behind the beauty you’ll find here.

On this Florence walking tour, you’ll see astonishing Renaissance architecture, like Florence’s Duomo, and enjoy skip-the-line access to Michelangelo’s masterpiece, his David. From ruthless warring families, to artistic rivalries and religious upheavals, our guide will leave no stone unturned on this whirlwind private Florence tour. 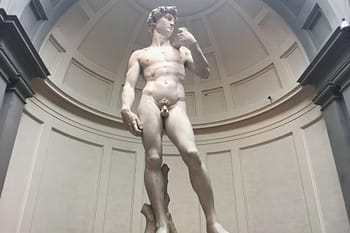 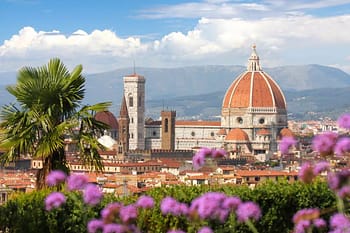 After meeting your expert guide, you’ll embark on your exploration of the city center. The whole historic center of Florence is pedestrianized, which gives the effect of the city remaining unchanged for 100s of years. It is easy to imagine Leonardo da Vinci or Michelangelo, strolling over these cobbled streets, sketchbook in hand.

Join your expert guide on this private Florence tour and stroll across the Ponte Vecchio. This beautiful bridge is one of the most iconic in Italy – a country where beautiful bridges are hardly a scarce feature of the urban landscape. The Ponte Vecchio is adorned in jewelers and cuts an attractive figure, with the gorgeous winding Arno rolling beneath it. However, long ago, the Ponte Vecchio wasn’t only a delight on the eyes – the bridge served an important political function.

Hidden within the Ponte Vecchio is a secret passage, the Vasari Corridor. This allowed the ruling Medici family to get from the Pitti Palace to the Uffizi – the government offices at that time – without being seen by the public.

MICHELANGELO’S DAVID AT THE ACADEMY

David is renowned worldwide as an incredible achievement; a work that, by any other man, would symbolize the height of his artistic achievement. David stands at an astonishing 17ft tall.

Michelangelo took 2 years to finish his David, as he worked with an enormous slab of imperfect marble which other artists had rejected. How Michelangelo turned damaged marble into the masterful David demonstrates his overall alchemical abilities; and confirms his status as a Great Master.

On this Florence walking tour, you’ll see Florence’s magnificent Cathedral; a remarkable example of the Italian Gothic style. However, by the time of the Renaissance, it was somewhat out of fashion. Worse than that – it had a hole in the roof. Something had to be done.

The Florentine council held a competition to redesign the dome. Many great architects entered, enticed by the dazzling prospect of eternal fame. However, none of them won. Instead, the design for the dome was left to the talented, but eccentric goldsmith Brunelleschi. The most remarkable thing? Brunelleschi won without even disclosing how the dome was to be built.

Brunelleschi promised that the new dome would actually contain two domes – one resting inside the other. He refused to disclose how he planned to achieve this feat of engineering, insisting that, were he to do so, another rival would steal his design. In this day and age, it‘s unthinkable that a man like that would ever win a project of such importance – but we don’t live in Renaissance Florence.

The men of the council knew that Brunelleschi was a genius. From an adolescent apprentice at a goldsmith’s studio, he went on to excel at many different creative fields – stone, bronze, enamel work, work with gears. If you can name it, Brunelleschi had mastered it. So, they awarded him the project.

It took Brunelleschi 16 years to complete the dome; 16 long years that were rife with rivalries, failures, and even imprisonment. Many thought the dome would never be complete, but Brunelleschi – master engineer and architect – made it happen.

Today, the dome still stands proud on the Tuscan skyline. On this private Florence tour, our expert, local guide will reveal even more details behind the fascinating history of the Duomo, as well as the secrets behind the Cathedral and Baptistry.

Toward the end of this Florence walking tour, at the bottom of the Mercato Nuovo, you’ll find Il Porcelino. This bronze little piglet sits there, day and night, waiting for tourists to come and rub his snout – legend has it that, if you do so you will definitely return to the city.

Il Porcelino is a copy of a marble Greek statue, that’s lost to time – a marble Italian copy can be found in the Uffizi. The sculpture that sits at the bottom of Mercato Nuovo is a flourish of the Italian Baroque.

This gruff little wild boar has come to serve as a symbol for the city of Florence. Hans Christian Anderson – of The Little Mermaid fame – remarked that, even in his day, travelers on the Grand Tour had worn the nose gold by rubbing it for good luck. Today, as in Christian Anderson’s day, the nose is gold and the body of the little boar is green.